SU to honor students forced to leave during WWII 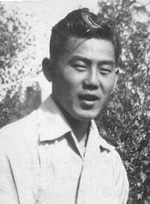 (February 18, 2011) It has been nearly 70 years since Thomas T. Yamauchi was forced to leave Seattle University and abandon his prized education. He was one of 15 Japanese Americans whose educations at SU were disrupted by their unjust removal in 1942 during World War II.

To contribute to the healing from this injustice, the Seattle University Board of Trustees will grant Yamauchi and the other former students honorary bachelor degrees at the undergraduate commencement ceremony June 12. Honorees or their relatives have been invited to accept the degrees.

Yamauchi's widow, Anne, says she's looking forward to accepting the degree on his behalf. "He was anxious to continue his schooling after camp," she said. "He was very ambitious."

University President Stephen Sundborg, S.J, and Board of Trustees acted on a request by Professor Lori Bannai, associate director of the law school's Fred T. Korematsu Center for Law and Equality, that was broadly supported by Dean Mark Niles, the faculty and the university community.

"These individuals, who were our students, were required by federal order to leave our community as a result of the fear, racial hatred and hostility that prevailed in the wake of Pearl Harbor," said President Stephen Sundborg, S.J. "We honor these former students to recognize their courage and sacrifice, to address the injustice that occurred, and with hope that this recognition contributes to the healing process."

Dean Niles said it is only right that a university committed to equal justice under the law honor these students. The law school - which is home to the Korematsu Center named for the man who took his fight against the Japanese American incarceration the U.S. Supreme Court - was proud to support the initiative.

"These students were torn from our community as a result of one of the most sweeping deprivations of civil rights in modern times," Niles said. "In moving forward to live productive, often heroic lives, they represent the power of the human spirit to survive and thrive in the face of great adversity.

The university announced its plans as the Japanese American community marks its Day of Remembrance, the annual observance of the signing of Executive Order 9066, which began the forced removal of 120,000 people of Japanese ancestry, two-thirds of whom were native-born citizens of the United States. Although it might bring back painful memories of a period in American history, the remembrance provides an ongoing reminder of the dangers of prejudice borne of ignorance and fear.

In observance of the Day of Remembrance, the Minidoka Pilgrimage Planning Committee, Friends of Minidoka, Seattle University, and Japanese Cultural and Community Center of Washington will sponsor the Remembrance Taiko Festival at 2 p.m. Sunday, Feb. 20, at Piggott Auditorium on the SU campus.

Bannai said recognizing the wrong done to these students and presenting the degrees they would have received is an important part of the healing process. Law school librarian Kerry Fitz-Gerald completed extensive research to locate the honorees, whose relatives have shared wonderful stories about their lives.

"While these students suffered grievous losses, they endured and survived, and most were able to pick up the broken pieces of their lives and rebuild," said Bannai, whose own parents were incarcerated during the war and who was one of Fred Korematsu's attorneys.

Tom Yamauchi did indeed rebuild, going on to a successful career with Boeing and the Northrup Corp., and a long marriage with Anne before his death in 1990.

Other honorees identified to date are:

As part of the recognition of its former students, the university and Korematsu Center are organizing a series of discussions, exhibits and historical programs for the university community and the public. Planning is underway and details will be announced soon.

The university urges Japanese Americans students or their relatives whose SU educations were disrupted by the wartime exclusion and incarceration orders to contact Junsen Ohno, administrator for the Korematsu Center for Law and Equality, 206-398-4283.

Read more about the honorees and the university's plans.