Advance justice and equality through a unified vision that combines research, advocacy, and education. 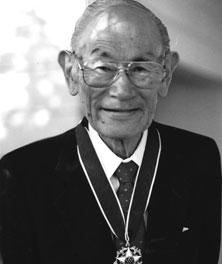 We are thrilled to name the center after Fred Korematsu. His example and quiet dedication to justice for all provides our inspiration, and the Center will work to honor his legacy.

During World War II, Fred was a 22-year-old welder in Oakland, California, who defied military orders that ultimately led to the internment of 110,000 Japanese Americans. He took his challenge to the United States Supreme Court, which, in 1944, upheld his conviction on the ground that the removal of Japanese Americans was justified by "military necessity." That decision has been widely condemned as one of the darkest chapters in American legal history.

Forty years later, Korematsu filed suit to reopen his case on proof that the government, when arguing Korematsu's case during World War II, had suppressed, altered, and destroyed material evidence that contradicted the government's claim of military necessity. In 1983, the Federal District Court for the Northern District of California granted his petition and vacated his conviction.

Korematsu went on to champion the cause of civil liberties, not only seeking redress for Japanese Americans who were wrongfully interned, but also traveling the country to advocate for the civil rights of other victims of excessive government action, especially after 9/11. In awarding Korematsu the Presidential Medal of Freedom in 1998, President Clinton remarked, "In the long history of our country's constant search for justice, some names of ordinary citizens stand for millions of souls--Plessy, Brown, Parks. To that distinguished list today we add the name of Fred Korematsu."