In 2011, the Korematsu Center and the School of Law spearheaded the effort to award honorary degrees to Japanese Americans who were forced to leave their Seattle University educations as a result of their incarceration during World War II. Learn more about this project on the Seattle University website.

It has been nearly 70 years since Thomas T. Yamauchi was forced to leave Seattle University and abandon his prized education. He was one of 15 Japanese Americans whose educations at SU were disrupted by their unjust removal in 1942 during World War II. 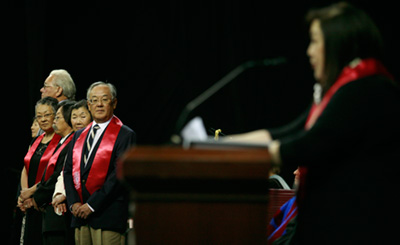 To contribute to the healing from this injustice, the Seattle University Board of Trustees granted Yamauchi and the other former students honorary bachelor degrees at the undergraduate commencement ceremony on June 12, 2011. Honorees or their relatives were invited to accept the degrees.

Yamauchi's widow, Anne, said she was looking forward to accepting the degree on his behalf. "He was anxious to continue his schooling after camp," she said. "He was very ambitious."

University President Stephen Sundborg, S.J, and Board of Trustees acted on a request by Professor Lori Bannai, associate director of the law school's Fred T. Korematsu Center for Law and Equality, that was broadly supported by Dean Mark Niles, the faculty and the university community.

"These individuals, who were our students, were required by federal order to leave our community as a result of the fear, racial hatred and hostility that prevailed in the wake of Pearl Harbor," said President Stephen Sundborg, S.J. "We honor these former students to recognize their courage and sacrifice, to address the injustice that occurred, and with hope that this recognition contributes to the healing process."

One woman's 69-year journey to earn her degree at Seattle University, by Lori Matsukawa, King5 News