US vs. Hirabayashi Conference

The Fred T. Korematsu Center for Law and Equality hosted a major conference Feb. 11, 2012, to commemorate the 25th  anniversary of the Ninth Circuit opinion in the Hirabayashi v. United States coram nobis case.

The conference celebrated Mr. Hirabayashi's courage in resisting military orders that imposed curfews on Japanese Americans and ordered them to report for incarceration; reflect on his 1943 Supreme Court case that upheld his convictions and the extraordinary work of his legal team in reopening of his case nearly 40 years later; and use his case as a springboard to move forward in the struggle for civil rights.

Please visit the Korematsu Center for Law and Equality for further information.

The complete brochure content distributed during the conference is now available, or view the front cover.

The 25th Anniversary of the United States v. Hirabayashi Coram Nobis Case: Its Meaning Then and Its Relevance Now

During World War II, Gordon Hirabayashi was a 24-year-old senior at the University of Washington - an American citizen by birth - when, as acts of civil disobedience, he defied a curfew imposed on persons of Japanese ancestry and refused to comply with military orders forcing Japanese Americans to leave the West Coast into concentration camps. He appealed his convictions to the U.S. Supreme Court, which, in one of the most infamous cases in American history, held that the curfew order was justified by military necessity and was, therefore, constitutional. A year and a half later, in Korematsu v. United States, the Court relied wholly on its decision in Hirabayashi to uphold the constitutionality of the mass removal of Japanese Americans.

Forty years later, in 1983, represented by a remarkable and dedicated team of lawyers, Mr. Hirabayashi reopened his case, filing a petition for writ of error coram nobis in Seattle, Washington, seeking vacation of his wartime convictions on the ground that the government, during World War II, had suppressed, altered, and destroyed material evidence relevant to the issue of military necessity. In 1986, the Ninth Circuit, in an opinion authored by Judge Mary Schroeder, vacated both Mr. Hirabayashi's curfew and exclusion convictions on proof of the allegations of governmental misconduct.
Hirabayashi v. United States, 828 F.2d 591 (9th Cir. 1987). 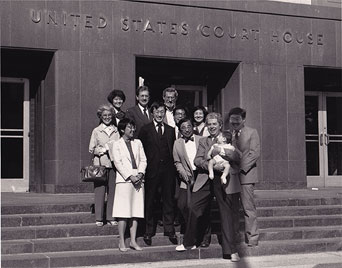 We wish to thank the following individuals, institutions, and firms that agreed to co-sponsor this event: