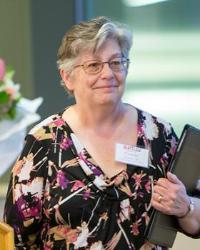 There's a reason why Professor Connie Krontz '89 connects so strongly with non-traditional students at Seattle University School of Law. It's because she was one herself, starting law school at the age of 33 after working at the jobs listed above. Like many whom she taught, she was also a first-generation college student.

Now, after 25 years in the career she has loved most of all — teaching legal writing — Krontz is retiring. The law school community will gather to honor her contributions with a reception on April 2 at 4:30 p.m. in Sullivan Hall.

"I think what we have built here in the Legal Writing Program is pretty amazing," she said. "Throughout the years, I feel like I've been a constant. I'm here, and I always have the best interests of the students at heart."

Becoming a lawyer, let alone an academic, was never in Krontz's plan while growing up in Morris County, New Jersey, as one of six children. When her parents moved to Washington state the day after she graduated from high school, Krontz stayed behind on the East Coast.

"I was on my own and I had to support myself, so work always came first," she said, explaining her extended journey to earning undergraduate and law degrees. This included attending three community colleges and two universities over nearly two decades, with a cross-country move along the way.

When she graduated from the University of Washington with a degree in social work in 1985, an adviser noted her excellent grades and strongly encouraged her to go to law school.

"I didn't know any lawyers. It wasn't even on my radar," she said. Another friend convinced her to try taking the LSAT. She showed up; he didn't.

Krontz enrolled at the University of Puget Sound School of Law (which was later acquired by Seattle University), graduated 11th in her class, and earned the Andrew Walkover Memorial Faculty Scholar honor for her skill, dedication, scholastic achievement, and leadership.

After graduation, she clerked for Washington Supreme Court Justice Barbara Durham for two years, followed by four years of handling criminal defense appeals for indigent clients at the Washington Appellate Defender Association (WADA). Along the way, Krontz grew weary of criminal defense and decided to return to the Legal Writing Program at the law school, where she had worked as an administrative assistant while a student.

In her 25 years at the law school, she has taught legal research, objective and persuasive writing, and oral advocacy. She also served as the faculty adviser for Moot Court, and she has coached moot court teams. She's a member of the Legal Writing Institute and frequent presenter at LWI conferences. She also co-authored the second edition of "Just Briefs" with Professors Laurel Oates and Anne Enquist.

"Connie is beloved by students and colleagues alike," said Dean Annette Clark '89. "We'll greatly miss her dedication to our students and the obvious joy she brought to her work every day."

In 2010, Krontz was diagnosed with breast cancer. Remarkably, she continued to teach through two surgeries, chemotherapy, and radiation treatments. "We had Top Pot doughnuts in class when I finished radiation," she said.

Krontz is famous among Seattle U Law students for the assignment she gives on the last day of class - a legal writing haiku poem. Here's one by Darrah Hinton '17:

"I love the cohesion of that group. They are really a family. There is a real sense of we're here for each other and you reach back for the next person," she said. "I love all the teaching I do, but that group has a special place in my heart."

She'll also return to volunteering with youth writing programs at the Bureau of Fearless Ideas, which she started during a recent sabbatical. "It will be fun to teach without grading and critiquing," she said.